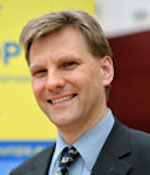 After internships at the German Federal Ministry of Justice (Berlin), the German Foreign Office (Singapore) and the European Court of Justice (Luxemburg), Mr Hoffmeister passed the bar examen with distinction in 1998, going on to work as an academic assistant at the Walter Hallstein-Institute for European Constitutional Law Berlin.

Mr Hoffmeister began his career at the European Commission in 2001, in DG Enlargement. After this he worked in the legal service for a number of years, where he was assigned a number of cases before the ECJ, the WTO and the International Centre for the Settlement of Investment Disputes. Between 2010-2014 he has been Deputy Head of Cabinet for Trade Commissioner Karel de Gucht since then he is Head of Unit for antidumping proceedings in the European Commission. Alongside this he lectures part time in International Economic Law at the Vrije Universiteit Brussels.

All sessions by Mr. Frank Hoffmeister