Counsellor of the State, President of CRES, China 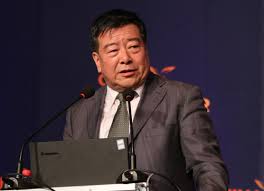 Counsellor of the State, President of CRES, China

Mr. Shi is the Counsellor of the State Council. He graduated from the Engineering Physics Department, Tsinghua University in July 1967, majoring in radiation dosimetry and protection. Mr. Shi had worked in the Nuclear Energy Technology Institute of Tsinghua University since November 1973. In October 1980, he joined the State Commission of Science and Technology (the former of Ministry of Science and Technology (MOST)). He was once appointed as the Deputy Division Chief of the Forecasting Bureau, Deputy Director of the Industrial Technology Bureau, Director of the Department of Industrial Science and Technology. He then moved to take up the position as the Deputy Director-General of the High and New Technology Department and Industrial Department (directorate grade). Mr. Shi also serves as the Chairman of the China Technology Advisory Association, China Society for Scientific and Technical Information, and Chinese Solar Energy Society.

All sessions by Ding-Huan Shi